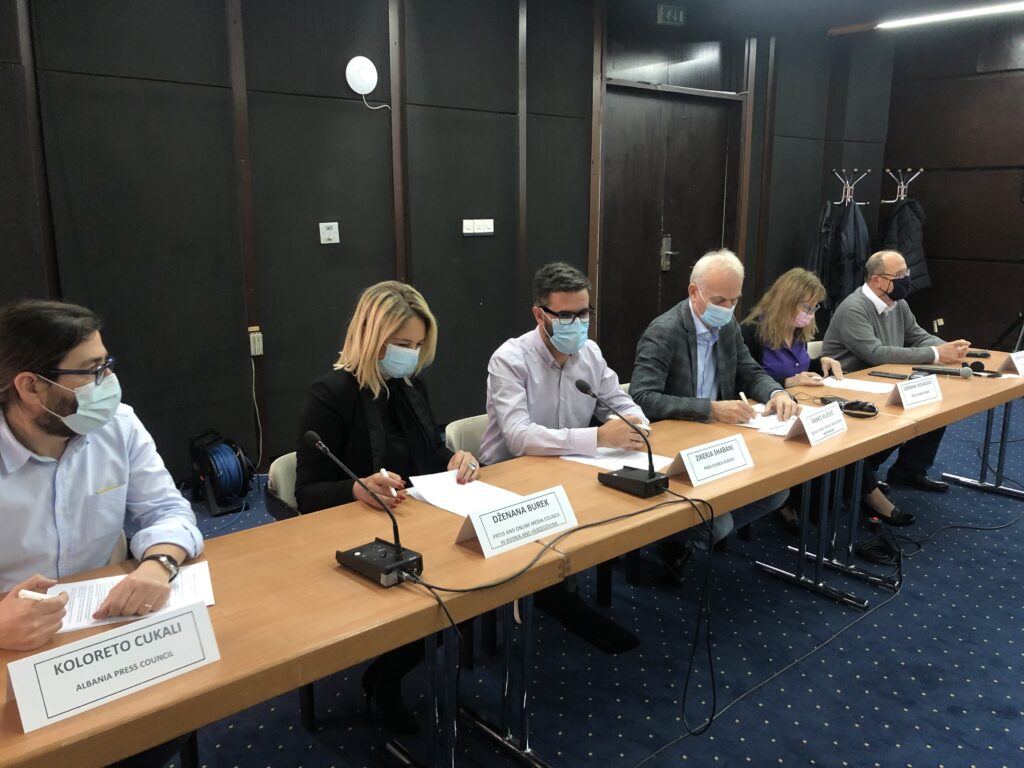 We, the representatives of Press and Media Councils from South East Europe and Turkey,

Recognizing the role of journalism in producing and disseminating public interest information, especially in times of crisis, and emphasizing the overriding importance of this role remaining free from capture or distorting influence;

Reminding the critical role played by media self-regulation in fostering media freedom through ensuring enforcement of journalistic ethical standards, helping minimize state intervention in the field of media freedom, and serving to decrease judicial action against the media;

Highlighting the importance of public trust in media and the challenges of maintaining media professionalism in an environment where new forms of media are constantly evolving;

Recalling the endeavour of press and media councils to adapt their codes of ethics to the new digital media ecosystem providing journalists with specific guidelines on how to work in this environment;

Alarmed by the dire financial situation of press and media councils causing existential threats to the independence and sustainability of these bodies;

Deploring ongoing threats to the safety of journalists in the region and alarmed by the resurgence of political threats to media independence, such as the abuse of State resources, including advertising, efforts by political figures to capture media, withdrawal of accreditation from journalists, harsh attacks which aim to stigmatise and discredit the media, and the targeting of the media through the abuse of judicial proceedings;

Stressing the potential threats of government’s attempts to regulate online media in particular the potential impact on the role of media self-regulation and thereby the existence of press and media councils;

Mindful of the new opportunities that social media platforms offer to journalists to disseminate their work, yet also noting that platforms are not neutral but have assumed an active curatorial or editorial role, including through the use of algorithmic systems, in the dissemination of content produced by media and other actors;

Alarmed by the growing number of malicious actors targeting and attacking independent media on social media platforms to reduce or prevent their distribution and outreach on these platforms;

Troubled by the increasing number of complaints received by press and media councils regarding the proliferation, amplification, and promotion of potentially online harmful content, including disinformation and hate speech;

Noting the variety of new media actors online performing journalistic work and the importance of cooperation among them in pursuit of journalism as a public good;

Highlighting the urgency of equipping citizens with media and information literacy skills to enable them to navigate the evolving information landscape notably by the capacity to distinguish reliable from unreliable information and support professional journalism;

We, therefore, call on media professionals of the region to:

ENSURE the transparency of their ownership and to support media and journalists’ organizations in their efforts for improving the working conditions of all media workers thereby contributing to restoring trust in media;

CONTRIBUTE to the financing of the press and media councils to ensure the independence of media self-regulation and sustainability;

We, therefore, call on public authorities and institutions to:

PROMOTE media pluralism and safeguard the sustainability of journalism through support to media linked to ensuring compliance of media with professional standards or abidance to media self-regulation;

PROMOTE media and information literacy in formal and informal education;

ENSURE that representatives of press and media councils are consulted and engaged in all initiatives related or pertaining to media (self)-regulation online and offline;

REFRAIN from undue regulation of the digital media environment and not in line with international standards related to freedom of expression;

We, therefore, call on internet platforms to:

COOPERATE with media self-regulation and civil society organizations at the local level in order to safeguard and enhance guarantees for the full exercise of the right to information and freedom of expression, both online and offline;

COLLABORATE with media and press councils to install a dialogue and develop appropriate actions to mitigate online harmful content while prioritizing information of public interest on internet platforms;

PROVIDE opportunities to members of media and press councils for specific appeal mechanisms and inquiries related to their journalistic content being taken down on social media platforms;

ENSURE that the local contexts – in particular related to political aspects and online harmful content – are taken into consideration in content moderation, both in taking down, downranking, and increasing visibility, of journalistic content online, by increasing the level of human moderators adequately trained on sensitive local political, cultural, ethnic, and socio-economic aspects.