The Albanian Media Council reacts with great concern to the blocking by AKEP of access to the Medium.com community website. From this decision, Albania joins 3 other countries that have blocked Medium: China, Egypt and Malaysia. This decision of AKEP is pure censorship, it is an anti-legal and anti-constitutional decision.

Also, a few days ago AKEP illegally blocked access within the territory of the Republic of Albania to some pornographic websites, which is also a pure censorship that leads Albania to the group of countries such as Saudi Arabia, where these websites are blocked for access.

AKEP does not have the legal right to do so.

Medium is an international blog where hundreds of people post articles and thousands more are updated daily. The Medium website remained blocked for several days, while on Tuesday some ISPs have not yet accessed it. 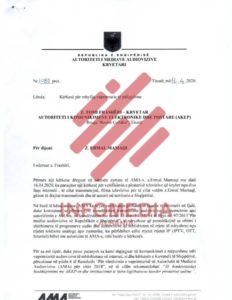 The AMC is committed to copyright, and is one of the promoters of the protection of this right. But it cannot tolerate censorship and anti-legal actions taken in the name of any just cause.

For example, if someone posts on the FB a list of pirated sites, this does not mean that the Albanian government should shut down the FB. Moreover, Medium.com has a page where it is clearly possible to report copyright infringement or plagiarism, which makes even more difficult the recommendation of AMA and the censorship of AKEP.

The AMC is very concerned that, while the censorship law against the media has not yet been adopted pending the decision of the Venice Commission, AKEP and AMA are acting as if this law were in force.

The SEC calls on international bodies to intervene in the pure application of censorship in Albanian territory.

The AMC calls on partner media to report heavily on censorship.

The AMC also calls on Albanian citizens to react strongly to actions that restrict their right to information in an anti-legal and anti-constitutional manner.

Together we must stop these actions from turning into something “normal” for Albania.