Members of Dutch Parliament have asked their government to ensure that Albania amends the controversial “anti-defamation” law in line with the forthcoming recommendations of the Venice Commission reported today Exit.al 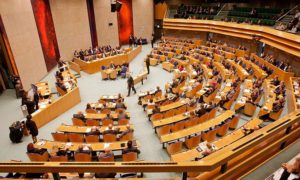 The parliamentary record for a debate on European Integration states that Dutch MPs will support the opening of negotiations for accession talks with Albania. They said however that a number of issues need to be addressed including the judicial vetting process, corruption, organised crime, unfounded asylum applications amongst others. It also states that the initiation of proceedings against those accused of vote-buying should be a key priority.

It also clearly states that the media law must be amended to reflect the recommendations of the Venice Commission, noting that this is also an important priority. (Read more at Exit.al)

Concerns have been raised by local and international media freedom organisations, the OSCE, CoE, EU and members of EU Parliament over fears the law will be used as a political tool to control independent media.

The Albanian Media Council has reacted with interest to this law and infringed on freedom of the press more than reincarnations to fulfill.