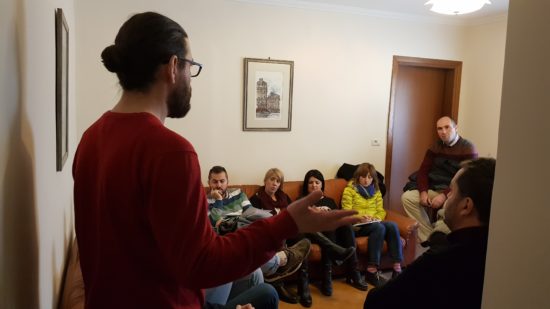 On January 26th, Albanian Media Council hosted at its office in Tirana a group of Macedonian journalists, part of a study visit organized by BIRN Macedonia aiming to exchange experience and information among the colleagues. Representatives of AMC discussed challenges faced by Albanian Media today and the effort taken by Albania Media Council to promote self – regulation and enhance quality journalism in the press.

They met with the Board Member Sokol Shameti and Executive Director of Albania Media Council, Mr. Koloreto Cukali.

Mr. Sokol Shameti, an active member of Albania Media Council stated that an essential factor negatively affecting the level of journalism in Albania is the school of journalism that is promoting PR more than journalists. According to Shameti, it comes as a result of market demand taken in consideration that journalist are not well paid.

Cukali explained to the journalists that ‘One of the biggest challenges of the Media Council is to convince the media owners that the Council is to the benefit of the public, journalists and the media itself. According to Cukali media is mostly used for personal gains, to create occult relationships with power, and its owners often lack journalistic background thus they have no reason to accept an authority that would interfere with media abuse’.

Cukali explained that beside the difficulties Media Council is willing to put efforts on ensuring and reinforcing respect for the code of ethics as an interactive form of self- regulation through a mechanism of resolving complains.

This visit is the second after the one organized in Belgrade last November.